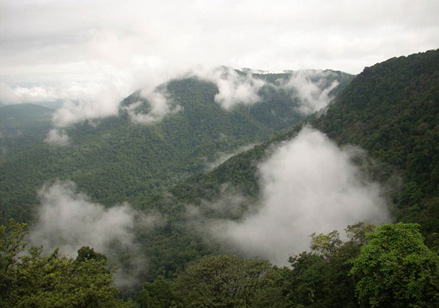 Situated 32 kilometers from Thirthahalli in Shimoga district, Agumbe is a tiny village that falls on the state highway. The tiny village is much known for its beautiful sunset and the trek opportunities it offer. Among the important waterfalls nearby include Barkana falls, Onaki Abbi and Jogigundi falls. During the months of January, December and November the setting is found in its best. You can go for an exciting trek to Narasimha Parvatha.
Prime Attractions

Achakanya Falls is a petite waterfall on the way to Hosanagara near Aralsuruli. The Sharavathi River takes an amazing jump of 6.10 m to form this brilliant falls. Achakanya Falls is just four kms away from the Shivalinga.

Shivalinga The holy source Ambutheertha lies down the river Sharavathi 16 kilometer North West of Thirthahalli town. This is where a Shivalinga is installed.

Mandagadee Natural Bird Sanctuarylies on the banks of the river Tunga 32 kilometers northeast of Thirthahalli. Variety of migratory birds take refuge here during the months of July and October.

Agumbe is located in Shimoga district. It is at a distance of 380 Kms from Bangalore and 100 Kms from Mangalore. Agumbe receives a very heavy rainfall and is called Cherrapunji of the south. It receives second highest rainfall in India. It is also home to Agumbe Rainforest Research Station the only permanent rainforest research station in India.

Agumbe is one of the highest peak's of western Ghats and is one of the four mountains which connects the plains to the coast. It is also part of Malnad. It is surrounded by a rich biodiversity, and adjacent to one of the last surviving lowland rain forests.

There are many hills, rivers and streams hidden in the dense forests around Agumbe. It is also a trekker's paradise.

Sunset Point attracts a lot of visitors. On a clear day one can see the sunset over the Arabian Sea.

Gopalakrishna Temple is a 14th century temple which exhibits Hoysala Art is a major tourist attraction.

Barkana Falls is at a height of 850 Feet. The view from the valley is very spectacular. This fall is formed by the Seeta River; stop at the Barkana view point to get the glimpse of the fall.

Kunchikal Falls is at height of 1493 Feet. It is the second highest waterfalls in India. This falls is formed by Varahi River. Onake Abbi Falls is beautiful water falls located deep in the forest. Onake means pounding stick in Kannada. Jogigundi Falls is a very small falls very close to Agumbe, is an ideal picnic spot. It takes about 10 to 15 mins to reach this place.

Around Agumbe are many hills, streams and rivers hidden in dense tropical forests. It is a location popular with trekkers who are willing to explore the jungles braving the rains, leeches and thick vegetation.

Where to Stay: There is no accommodation available in Agumbe. You have to stay in Shimoga or Sringeri.
Best Time to Visit: November to January.