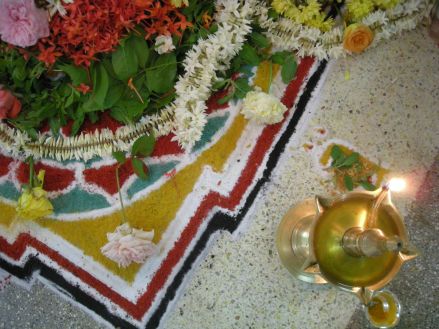 The matha gurus follow the philosophy of Advaita Vedanta. Following the tradition initiated by Sankara, the matha is in-charge of the Yajur Veda. (the Krishna (Black) Yajurveda is more prevalent in South India, over which the matha has authority in the Smarta tradition. The gurus of the matha teach that all the demigods (devas), described in the Vedas and the Puranas, are mundane manifestations of the same one cosmic spirit, called Brahman. Moreover, the innermost self of the human being is also not different from Brahman. They subscribe to the Vedic phrase "Aham Brahma Asmi", which means: "I am the Universal spirit". The gurus wear ochre robes, smear their forehead with sacred ashes or vibhuti, and worship God for many hours every day. They practice intense penance and meditation, which they believe helps in the control of the mind. They sustain themselves on an optimum diet and minimal sleep. They meditate on the Rudraksha beads and worship Shiva Linga every day. To an Advaitin, Shiva is Vishnu and Vishnu is Shiva. Both are one and the same. The Sringeri gurus advocate that an individual must not merely revere a guru and listen to his teachings, but imbibe the good habits of the guru in their own life.

Some of the things advocated by the gurus are:
Satvic habits which include vegetarianism, cleanliness, discipline, etc.
Regular worship of God, development of Bhakti.
Giving importance for learning and knowledge.
Good conduct, honesty, generosity, and adherence to scriptures.
Austerity and simplicity .
Love, respect, and responsibility towards one's family or community
Destruction of pride and ego

The material world is considered as maya or temporary, like a dream, so they believe that one should be involved in the material world only in order to fulfill one's responsibility. Although they adhere to the teachings of Sankara, they read other secular and religious works. Within the recorded history of the last two centuries, every one of the gurus at Sringeri has been a polyglot and a scholar with knowledge of a wide range of subjects. They do not advocate religious conversion, and believe that individuals must follow the religion of their own birth, properly and correctly.