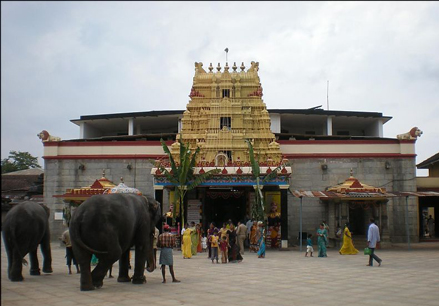 Sringeri has now grown into a great center of knowledge and learning. A great service in the form of Vedic and Sanskrit education is carried out on gurukula basis at Sringeri. Already the gurukula has produced two great Jagadgurus in our living memory - Sri Abhinava Vidyathirtha and his guru H. H Sri Sri Chandrashekara Bharathi both reverd Jivanmuktas. The subject included Vyakarna, Jyotisha and Mimamsa, Tarka Sahitya, Vedantha and Rig and Yajur Vedas. About 10 professors and lectures carry out the teaching. The number of students now totals about 100. The year 1995 will mark the centenary year for the institution.

The Sringeri pitha has a library, which contains numerous rare works of Adi Shankara, palm leaf manuscripts, ancient and handwritten books on Vedas and all branch of shastras. The record accumulated over the centuries and correspondence between the pitha and Maratha and Vijayanagara rulers and others make a formidable collection in the library.

The pitha also publishes serval journals in English and local languages to prorpagate the teaching of Shankara Bagavthpada. A monthly journal Shankara Krupa, carries the message of dharma to every home. It is published in Telugu, Tamil, Kannada, and Malayalam. Magazines in English include Tatvaloka, a bi-monthly dedicated to truth and moral excellence under the guidance of the Jagadguru. The Greatness of Sringeri is another new publication on the matha, which deals with the life and achievements of 36 sages of Sringeri Sharada Pitha. The Sharada Dhanavantri Hospital is boon to the poor, Started by H. H Abhinava Vidyatirtha, it is a modern hospital with sophisticated equipment. In other words of His Holiness, it is developing like " the moon in the Suklapaksha with liberal contribution from various devotes and institution in India and abroad" The pitha has a number of branches at various places of pilgrimage all over India.