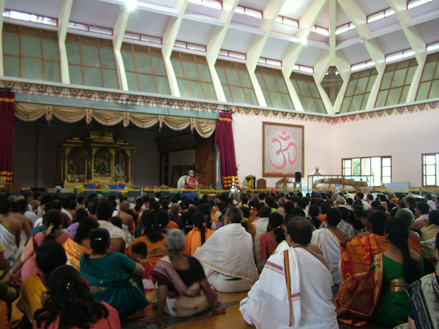 Sri Sringeri Sharada pitha has had a continuing line of succession of Acharya. They have been men of great erudition, spiritual attainment and compassion known as the Jagadguru. Each one of them has added to the luster of the pitha. The present acharya, Sri Bharathi Thirtha Mahaswamigal is the 36th in the line of succession of Sringeri parampara. He always engaged in the welfare of his disciple and devotes. His knowledge of the scripture is unparalleled. His learning is vast and spiritual attainment immense. He was initiated into sannyasa in 1974 by Sri Abhinava Vidyathirtha, under whom he mastered the shastras in just 8 years. He is linguist, full of compassion and easily accessible.

Sri Chandrashekar Bharathi, the well known Jivanmukta and the 34th Jagadguru, was nominated by H. H Sri Sachidananda Narashimha Bharathi. The pitha attained eminence during Saint Vidyaranya's regin in the 14th. He was instrumental in establishing the Vijayanagara samraja through Harihara and Bukka. The matha was raised to the status of samsthana by which the rulers conferred with the acharyas in the administration. Sri Sureshwar-acharya was first head nominated by Adi Shankara for the Sharada pitha. He was direct disciple who attained name and fame for his many works, including Naishkarmya- siddhi and Manasollasa

Followers of the Matha

Relationships with other Mathas and institutions

The matha has enjoyed patronage from many kings and rulers. Its sage Vidyatheertha was contemporary with the founders of Vijayanagar Empire, and the matha was given lavish grants of land by the Vijayanagar Kings. Vidyaranya another matha head was himself the advisor to the Vijayangar King. Tipu Sultan, the famous Muslim ruler of Mysore, also respected the Sringeri Acharyas, and helped it to sustain itself. Even in modern times the matha has had good relations with the State and Central Governments, as it has always been politically neutral and non-controversial. In Independent India, however, with the coming of land reforms, the Sringeri matha lost much of its traditional land and sources of income, and at one time was struggling to maintain itself. With the increase in donations by NRIs, however, things have turned for the better. The matha maintains good relationships with the three other mathas believed to have been founded by Sankara, located in Puri, Dwaraka, and Badrinath. In addition, over the centuries, the successive heads of the Sringeri matha had established branch institutions, many of which continue to function, with their own collateral lineages. In the interests of preserving all the traditions derived from the Vedas, the Sringeri matha also maintains cordial working relationships with institutions belonging to other Vedanta schools, such as the Sri Vaishnava and Madhva institutions.